Every Second Counts When Countering Drones

Consumer drones may be the next big thing, but they do risk endangering public safety, as they can transport chemical, explosive, biological or incendiary agents. There is increasing concern about the misuse of drones, ranging from invasion of privacy to crimes such as corporate espionage, covert delivery of drugs and weapons, all the way to the endangerment of public figures and terrorist attacks. Difficult to detect and carrying payloads up to a few kilograms, drones increasingly represent a threat to critical infrastructures, public figures and at public events. Security agencies, government authorities as well as private organisations and facilities that require protection need technology to counter this threat.

Whether intentional or accidental, the rising tide of misuse runs parallel with dramatic growth in the consumer drone market itself. In 2016, the global drone market was worth $4.5 billion US. By the end of the 2017 financial year it was worth $17.82 billion and is forecast to be worth between $50 and $100 billion by 2020. (source 1)

Availability of relatively inexpensive and easily operated flying drones presents a new challenge for the protection of public and private spaces. The devices provide ample opportunity for misuse - and there is growing evidence that remote drone operators are taking advantage. One indicator is the exponential trajectory of drones in aerial proximity to aircraft. “Airprox” reports to the UK Civil Aviation authority rose from zero in 2013 to 127 in 2018, quadrupling in the last five years. (source 2)

Drones pose a threat as they can evade police cordons, walls and fences by simply flying over them. Countermeasures using visual and sound detection are rarely the answer, as performance is limited by local interference. To be successful, detection systems should have high sensitivity, give an early warning, and be designed not to create false alarms. Even electronic detection is not enough: a complete system also requires a safe, reliable means of neutralising the threat. Public safety, as always is a key priority.

The first challenge is to detect these small flying objects, and once detected, the intruder must be classified to determine whether countermeasures are necessary. A superior approach is to monitor and analyse the radio control signals sent between the drone and operator.

Solutions like that developed by Rohde & Schwarz identify these signals, find their direction and, best of all, provide countermeasures that bring the drone down or send it back to base. The R&S®ARDRONIS automatic radio-controlled drone identification solution from Rohde & Schwarz can take bearings on the remote controller even before the drones take off. It alerts security personnel early-on, so they can take appropriate action in a timely fashion. The system has already proven itself in operations requiring the highest level of security, such as the July 2017 G20 summit in Hamburg, Germany, and US President Obama’s 2016 trip to Germany for the Hanover Trade Fair. 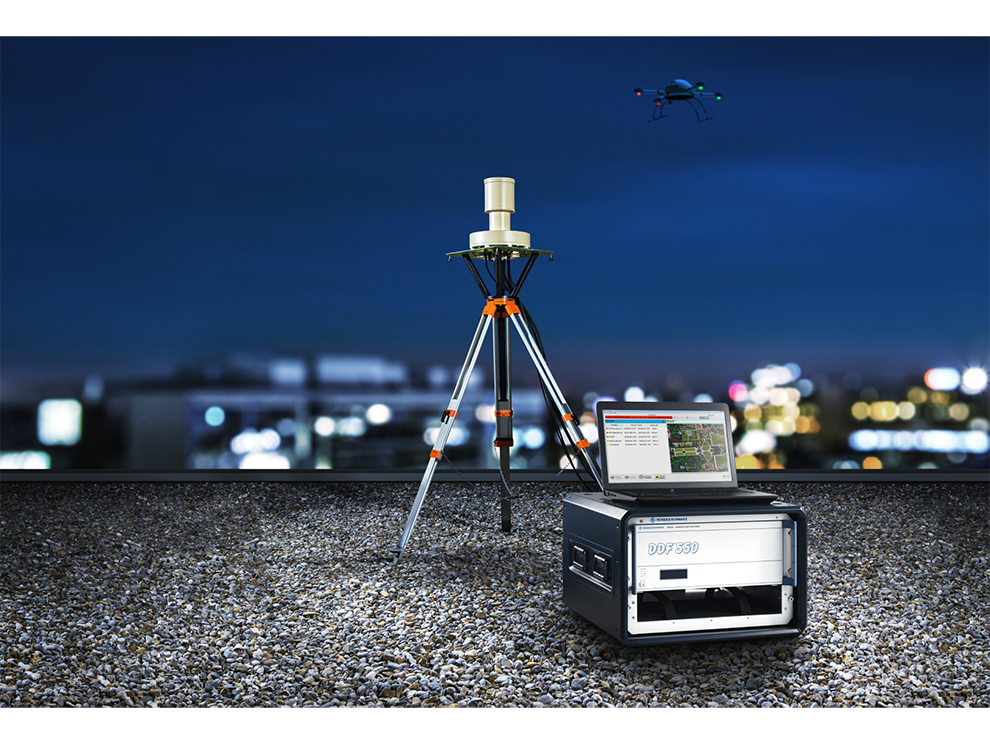 R&S®ARDRONIS focusses on the detection and counter measure of consumer drones. More than 90% of consumer drones communicate over the industrial, science and medical (ISM) bands, which are also used for telecommunications, including WLAN and Bluetooth® radio systems. The most common technologies for remote drone control are proprietary implementations of frequency hopping spread spectrum (FHSS) and direct sequence spread spectrum (DSSS). FHSS / DSSS radio links are notoriously difficult to detect and disrupt, but R&S®ARDRONIS is up to the challenge thanks to powerful online hopper analysis capabilities. It analyses the technical radio parameters such as hop length, symbol rate and modulation type, then classifies the transmission system used.

R&S®ARDRONIS combines the company’s antennas, direction finders and signal analysis solutions. Field tested hardware, combined with a powerful detection algorithm, permits reliable interception of short-duration signals with a signal duration as low as 350 µs, particularly in densely occupied ISM frequency bands. Under optimal conditions, range is 1-3km, depending on the drone and remote control transmit power and on the environment. A user-friendly operator interface lists the detected drones and their critical parameters. With optional direction-finding or position-fixing functionality, DF beams or location markers are used to display the detection results on a map. An expert view with detailed information about detected signals is available.

As a reliable, comprehensive automated monitoring system, R&S®ARDRONIS also permits data recording, including video footage transmitted to operators. Everything the system “sees” can be archived, from individual detection results to entire RF scenarios. This data can be valuable after the event, for example supporting law-enforcement processes.

Different R&S®ARDRONIS packages are available for detection and classification, direction finding and a low powered smart jamming solution. Whilst these options offer considerable advantages over other methods, there are situations where even this sophistication is not enough. A drone that does not emit any radio signals - for example when programmed with a fixed flight path - is not only undetectable, but also radio communications cannot be disrupted to force it to turn back or land.

Comprehensive protection, including these types of situations, is offered by integrating R&S®ARDRONIS into systems that include complementary additional sensors and effector, allowing an escalation of counter measures for effective threat neutralisation. The modular counter-UAS system GUARDION is a prime example, combining technology from Rohde & Schwarz, ESG and Diehl Defence.

GUARDION responds properly to potential threats from consumer drones, helping users to assess the situation. Experience has shown that in order to detect and counter drones, several technologies must be applied. As a comprehensive multi-sensor and multi-effector solution, GUARDION comprises sophisticated subsystems that complement each other for maximum security.

It leverages three leading German companies’ proven expertise in radar, radio detection and electro-magnetic countermeasures as well as sophisticated command and control systems. It is a versatile weapon that helps businesses, government authorities and critical infrastructures to protect against drone misuse.

The AI pilot: can we remove Maverick from his cockpit?

How Malawi is using drones to detect malaria hotspots

Celebrating the best in UK manufacturing, engineering excellence and innovation

Amputees able to move robotic arm with their mind

Starliner capsule poised for fresh test launch to the ISS