COMSOL is a global provider of simulation software for product design and research to technical enterprises, research labs, and universities.

If you’ve ever driven a car with no power steering, you’ll recall having to pull very hard on the steering wheel to turn the tires to match your movements. Thankfully, those days are past us. Power steering systems — which make driving much more comfortable by providing assistance through steering gears — have gone through many iterations over the years and continue to evolve with improved designs.

Until the 1990s, hydraulic and electric versions were most common. But these were the forerunners to the birth of a more fuel-efficient method called electrohydraulic power steering (EHPS). EHPS builds on the conventional hydraulic setup, but relies on an electric motor to power a hydraulic pump, rather than power from the car’s engine (Figure 1). Since the motor output is adjusted according to steering wheel angle and vehicle speed, much less power is wasted.

The pump sends fluid from a reservoir to steering gears, which apply extra torque to turn the tires when the driver turns the steering wheel. The system also includes an electronic control unit (ECU), torque sensor, valve to control fluid pressure, and a pipe system.

The Intricacies of EHPS

Designing a system with so many interrelated components is no small task, as the response of one part frequently depends on another. Seemingly minor adjustments can greatly affect successful function, efficiency, and reliability.

Engineers at FZB frequently use CAD and the COMSOL Multiphysics® software to model components of their EHPS designs (Figure 2). This helps them understand the behaviour of the inner workings of the system, and move as close as possible to a final design before shifting from virtual prototyping to physical testing. 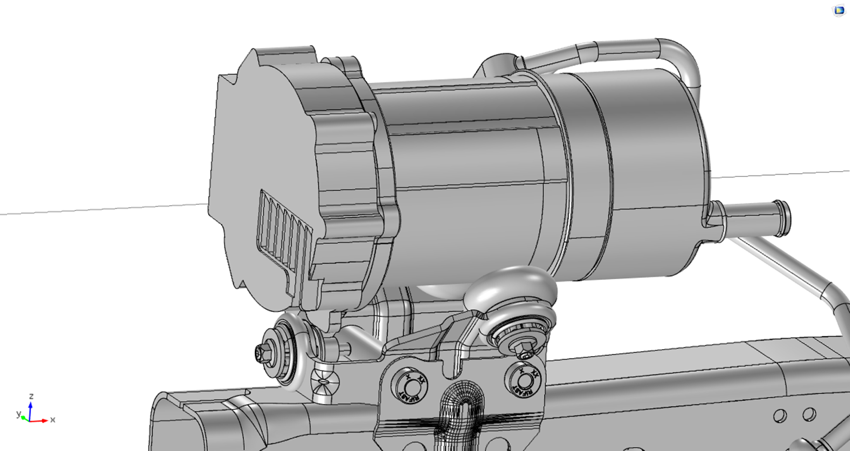 “Simulation helps us clearly understand a problem so that we can meet automotive requirements before building a physical model,” Qi remarks. “We need to know how the system will perform at many levels: mechanical, thermal, fluid, acoustic, and electromagnetic.”

He explains that validation and physical testing are expensive and time consuming, taking up to six months — but even after testing, a successful prototype will still need further optimisation. “That would be too slow for the design cycle, so we use simulation to speed up the process. We regularly talk with the engineers, for example, at Chrysler to improve our design in COMSOL software before any physical validation. Otherwise, we wouldn’t be able to meet the requirements.”

Seeking insight into the behaviour under the hood, Qi’s team at FZB modelled the major components of their latest EHPS design: the ECU, isolated mounting bracket, permanent magnet based motor, fluid reservoir, and helical gear pump. They performed simulations on each part separately, but also ran multiphysics analyses on the entire complex assembly, which differ in design for each vehicle model. 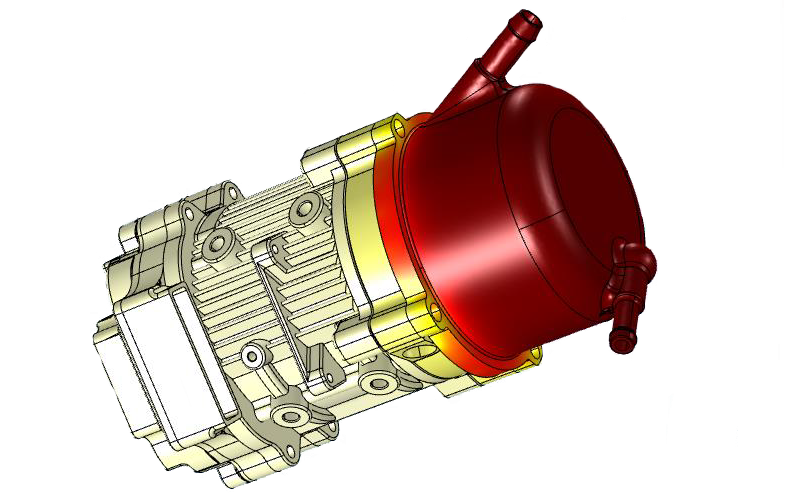 Figure 3. Steady-state and transient simulations were performed to obtain the temperature distribution in different parts when the pump is tested under various vehicle loads. The simulation results suggested ideal ranges for the local geometry, motor design parameters, size and number of vias on the ECU, and other thermally conducting features.

Heat Under the Hood

One major factor in system performance is the ability to operate in a safe temperature range. Qi created a model that accounted for heat transfer in the pump and heat generation in the fluid that lubricates the steering gears. Using the fluid temperature as a variable boundary condition, his team was able to predict temperature distribution throughout the system for different operating scenarios.

Qi explains that the pump is under the most strain when a car’s wheels are locked against a curb while a driver tries to turn them. When this happens in real life, the car’s battery will still send power to the pump even though the wheels are stuck, generating heat in the ECU and motor magnet.

Based on operating conditions supplied by car manufacturers, his team was able to model how the power steering fluid would behave in this scenario. They also studied how the ECU components, such as MOSFETs and the wiring harness, would respond to temperature levels from the heat generation occurring when the car's wheels are locked. They used a multiscale modelling method, beginning with individual component simulations that they integrated to the system level, and correlated the results to physical test data. With this analysis, they were able to tweak boundary conditions and material properties to understand various configurations.

Temperature distribution also affects structural components such as the housing, stator, rotor, and rods in the motor (Figure 4). Thermal expansion of the metal affects the motor’s efficiency, requiring more torque and RPM to deliver a desired power output to the pump. Fluid properties such as dynamic viscosity and density also change with temperature, requiring the gears to be adjusted in order to maintain smooth, consistent handling.

“This is the most challenging situation, when the vehicle is not moving and the pump has to do a lot of extra work,” Qi says. “We want to stay in the temperature range where parts won’t fail, so we modelled the setup for extreme situations to make sure it would hold up and perform just as well.”

Qi modelled changes in the wall thicknesses of the motor, stator, and pump due to the thermal expansion and to see whether stress levels would surpass the yield stress of any part (Figure 5). The motor’s stator presented a unique challenge, where thermal expansion would cause it to fail. Because they deduced this early on from the COMSOL simulation results, the team added a groove that would allow it to change shape without causing trouble.

Figure 5. Stress levels in a simulation analysing the interference fit of the housing and stator.

Fluid, Noise, and Electronics All Play a Role

The team also built an electromagnetic model to analyse the performance of the helical magnet and helical gear pump for different time steps during the pumping process (Figure 6). This gave them an understanding of how well the motor would perform over time, including an accurate estimate of heat loss on the coils and irons. This led to changes in the geometry that would accommodate a more uniform temperature distribution among components and parts. 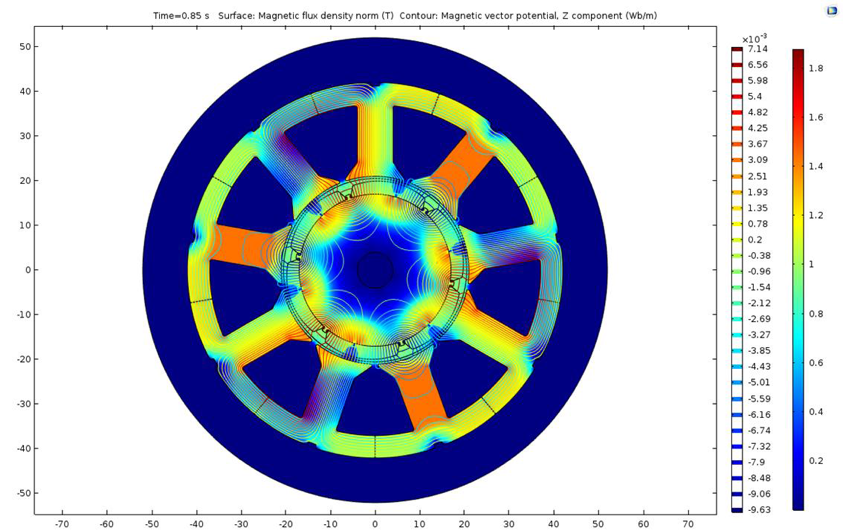 They coupled the electromagnetic simulation to a CFD analysis to understand how it influenced fluid delivery and pump efficiency. They used PumpLinx® software, a program specifically designed for modelling pumps, to obtain fluid efficiency, flow rate, and pressure ripples.

Qi transferred the fluid data into his COMSOL Multiphysics® model, made geometry updates through SOLIDWORKS® software, and then created an acoustics simulation to study the vibrations (Figures 7 and 8). An additional rotordynamics simulation helped him identify critical speeds where the vibrations would increase dramatically, causing the gears to fail. This would generate abnormal noise, and decrease efficiency.

“Not only did we need to understand how loud the system would be, we also needed to know how it affected the electromagnetic and fluid behaviour,” Qi says. “They’re all interconnected. We modelled a pressure ripple in the fluid, and in COMSOL analysed how the ripple altered the airborne noise. From the results, we were able to optimise bearings, shafts, and the shape of the helical gears and fluid pressure release grooves in the helical gear pump bushing.” 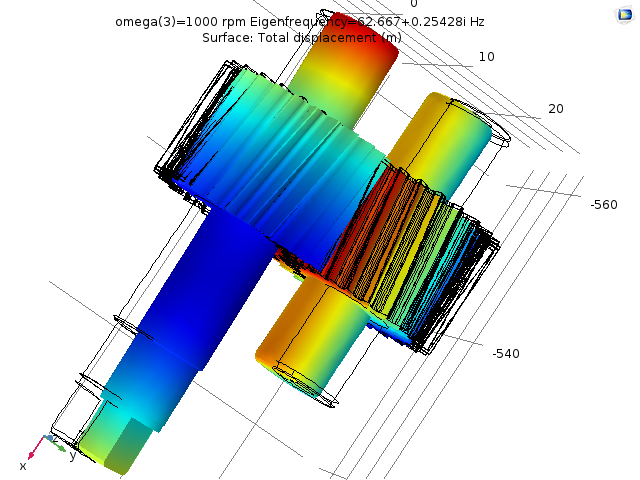 Figure 7. COMSOL results showing displacement of the helical gears for an RPM of 1000 and eigenfrequency of 2718.2 Hz, following the import of data from a fluid analysis in PumpLinx® software. 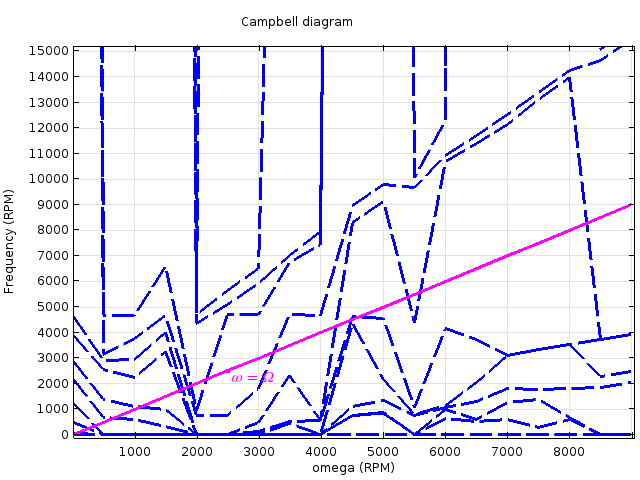 Figure 8. Campbell diagram generated in COMSOL showing the variation of eigenfrequencies with angular velocity for the helical gears.

Paving the Way for Improved EHPS

Ultimately, the FZB team made significant design improvements to their pump geometry based on their COMSOL results. From the simulations they also generated a report on the power consumption limits in order to guide the design engineers in meeting automotive requirements. They studied how different boundary conditions affected energy consumption and power output from the pump, and checked the simulation results for different scenarios against data from real driving tests.

“We chose COMSOL because we needed to analyse all the coupled physics behaviour,” Qi concludes. “Successfully carrying a vehicle from concept to market depends on many factors, and the timing of the design cycle can be very tight. We needed a truly multiphysics tool for this cross-disciplinary teamwork. COMSOL is very powerful for connecting many areas of physics with different boundary conditions that provide us with an accurate picture of how our EHPS design will perform.”

Tesla recalls one million vehicles that can pinch people’s fingers

How the electric drivetrain is helping to push industry forward

View from India: Software is the heart of mobility

Opec+ to cut oil production to boost prices against US advice